Puma Punku Ocean Clean Up Inc. was created with a vision by Frank Ruiz, a waterman and retired Longshoreman. In his 27 year career on the waterfront, he has witnessed firsthand the decay of our beach fronts with the damaging trash washed up on our ocean shores from tsunami’s, hurricanes and other artificial debris. On December of 2012 he gathered friends Jeffrey Williams, Sam Keanaaina and Darren Chu and their journey for a cleaner future began… 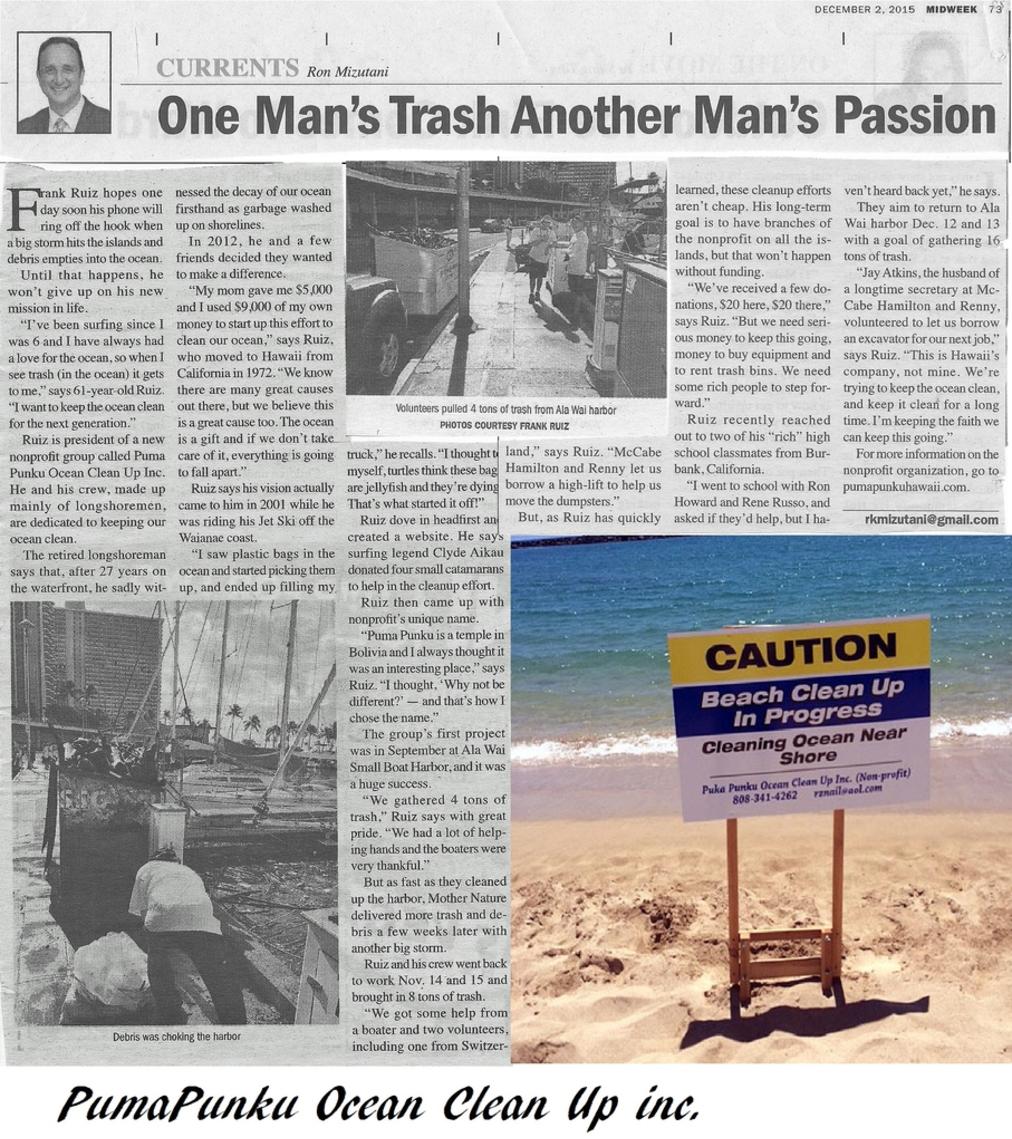 At Puma Punku Ocean Clean Up Inc. we are working to create hope and the opportunity for a better world.

But we can only do it with your help. Join with us in our mission and donate now.

Our Mission is Simple

Puma Punku Ocean Clean Up Inc. mission is for a clean ecosystem within Hawaii’s oceans, beaches and waterways.
About Us

My name is Frank G. Ruiz,

I was raised in Burbank California where I started surfing in 6th grade and got to know the California coast pretty well. I came to Hawaii in 1972 after graduating from high school looking for bigger waves and warmer waters. Hawaii was always a dream of mine from a young boy. I surfed at Sunset Beach, Pipeline, Laniakea, Velzyland, and Rocky Point. All the great spots on the north and south shores, but Sunset was my favorite. Working at night as a waiter at the Trattoria Restaurant freed up my day to surf.

In 1988 I became a Longshoreman at McCabe Hamilton & Renny where I worked my way through the ship gangs doing large scale operations like scrap metal, sand, steel, lumber, grain, coal, fully loaded barges, and of course thousands & thousands of containers. We also did every kind of rolling stock you can imagine. After a while, I became a Sub-Forman and ran the operation when the Forman was not there. After time and seniority, I went to the Wharf Gangs where I eventually became a Leaderman in charge of my own gang 65. After 27 years I retired at 61. The experience with supplying the islands with everything that is shipped here was priceless. The large scale operations are a part of me now.

In 2001 I bought a jet ski and was going up and down the west side of Oahu where I have lived for the past 22 years where I bought a house in Waianae. I started noticing a lot of plastic bags in the Ocean and would pick them up. I went to my Senator, Maile Shimabukuro, and asked her to introduce a bill SB 2906 which we got passed, allowing jet ski's to be used in Ocean Cleanups. Neil Abercrombie signed it into law with the help of Ed Underwood and William Aila, who were in charge of the DLNR at the time, and I had their full support. At that point, those two guys suggested I make a non-profit business to clean the ocean and Puma Punku Ocean Clean Up inc. was born.

We started doing cleanups at the Ala Wai small boat harbor at the end of 2015. We pulled out 4 tons of plastic & debris at our first cleanup. Our second Cleanup, in 2016, we pulled out 8 tons! Our third cleanup in 2016 we pulled out another 4 tons and our forth cleanup another 3 tons. We just did our most recent cleanup on December 10, 2016, where we took out another three tons for a total of 22 tons in 5 cleanups! We have been on the news 10 times and on the John Noland radio show 4 times. These are all archived on our website pumapunkuhawaii.com, which I'm very proud of.

Matson gave us a Grant of $1,500 in 2016.  We received other donations: $5,000 from my Mother just before she passed away at 94. She was glad to see me doing this. I also received $575 from other people. I have put in about $9,000 of my own money. We have big plans for the future. I would like to use the money from grants and other donations to make some commercials with Bruce Blankenfelt, Nainoa Thompson (both Hokulea Captains), Clyde Aikau, and possibly with William Aila and Ed Underwood, whom all support our vision for the future. If we could reach some of the wealthy residents of the islands like Larry Ellison, Oprah Winfrey, Rosanne Barr, just to name a few, I feel we could get seriously funded and become a force like Green Peace.

We could rent small cranes and cleanup under some of the bridges by Liliha Bakery where there is a lot of trash. Many places like that, but I would really like to get a big ship with two cranes and a big payload and go out to the Northwest atolls and do some serious work out there. Kamilo Beach, also known as Plastic Beach, on the Big Island needs regular cleanups. I would also like to be part of cleaning the Pacific Garbage patch that is planned for 2020 between California and Hawaii.

Well I know we have to work our way up to that. I would also like to have an office on each island, with a gym with basketball, volleyball, racquetball, a swimming pool and classrooms for substance abuse and teaching language. As you can see I have high hopes, but you have to start somewhere and this is it.

We must do everything we can to reverse the damage we have done to our Mother Ocean and I want to do my part. I hope you will help us get a real start on this quest of mine. We need your help, BIG TIME!

The people I've listed: myself Frank Ruiz, Mike Akiu, Jeff Williams, Darren Chu & Clyde Kanaulu, Rocky Tahara, Mark Gonsalves, Steve Iwasaki, who have joined us and are Matson machine operator's, are ALL experts at heavy equipment. We have all spent countless hours driving heavy equipment like Payloaders and Fork Lifts of all sizes. They get really big for some jobs. Backhoes, Top Loaders, Cabs...we have all driven. Straddler Machines, when Matson used them for years then changed to a Cab operation in 2001. We also now have a great new addition to our crew, Captain Jack Lutey of Matson who Captain's for all Matson's ships from here to China, Oakland, Los Angeles, Guam... everywhere Matson's ships go AND He has joined PPOCU in his retirement.

I want to add that I want Marine Biology to be 50% of our Ocean Cleanups, like on the Hokulea Canoes, I want scientists to be monitoring the Ocean Reefs and Water as we go to different places in the island chain. I want to make an Intern program for Marine Biology Students to come with us and study the Coral Reefs and Water where ever we go. I think this would be a terrific plus to our project.

Our hope is that through our hard work, the Keiki (children) of this and future generations may enjoy, explore and learn to take care of the moana (ocean) as our Kupunas (elders) once did.
Our Vision is Realistic